In the latest NFL News, the San Francisco 49ers are in the process of letting Kimmy Garoppolo go. The quarterback now has the official approval to start looking for a trade for the next season. However, many teams will be hesitant to trade for the QB as he is still recovering from his shoulder injury.

But many bettors who are in your sportsbook pay per head will be keeping track of the NFL as early and now, and they should not be surprised to see Garoppolo still training with the 49ers. Garoppolo also has gained clearance to trin with the team. They will all be reporting for training camp soon. 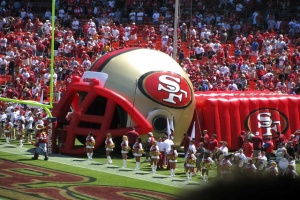 Garoppolo’s numbers are this: his contract has $26.95 million in the salary cap. The 49ers can trade him to any team of their choosing. Whichever team that will get him will take on his non-guaranteed salary for 2022. They will also be able to negotiate an extension with the QB to probably take off a bit from the steep hit to the salary cap.

And if you are offering action on NFL trades through your sports betting software and platform, you will see some teams who are likely to offer for Garoppolo. One team that pops up a lot in this discussion would be the Seattle Seahawks. However, the team currently does not have the salary cap to take on his current contract, so this is a bit improbable. The Cleveland Browns could possibly take on his full salary, since they still have $49 million in cap space. But pending the verdict of the suspension of one of their players, we will not know if the Browns will take him in. Aside from Garoppolo’s injury, giving up more than half your cap space is a big deal for the Browns.

Get the Best Sports Betting Software for Bookies with Price Per Player Here!