Why unders are hitting at historic rate in the NFL 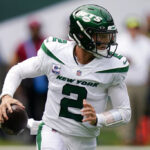 NFL teams are using Cover 1 defensive formations at a 27% rate. That's the lowest in its database, which goes back to 2016. Other formations involve more safeties, theoretically using deeper coverages and keeping plays in front of them.

Those lengthy drives consume game clock and also force teams to execute in the red zone. In fact, right now teams have only converted 66.7% of goal-to-go situations into touchdowns, which would rank as the lowest pace over the past 15 seasons.

How to Open an Online Sportsbook